Since its initial discovery on November 30, as an exploit used against Minecraft servers, the “Log4Shell” vulnerability has exploded across the Internet, sending the security community into overdrive. The original CVE assignment for this issue has now been joined by two more, creating further confusion and headache for security teams.

Flashpoint’s intel team, and Jake Kouns, CEO at Risk Based Security discuss what is known about this vulnerability.

There have been plenty of articles (some would say too many articles) on this topic. So, take your pick of any of the prior links if you want to get up to speed on the basics. We want to share some new information and perspective that you should be aware of when wrapping your head around Log4Shell.

It is important to call out that log4j is a popular logging framework in Java. This means it’s used in an extraordinary number of things. How many? Back in 2015, Oracle bragged that Java was running on 13 billion devices (even though we all know it’s 3 billion). Given the popularity of the library in question, Log4Shell might impact a large proportion of them, including IoT, ICS, medical, and more. We know it won’t impact all of them, but even a small percentage would mean a staggering number of devices. How prevalent is log4j? It’s used in the Mars 2020 Helicopter mission among other things. 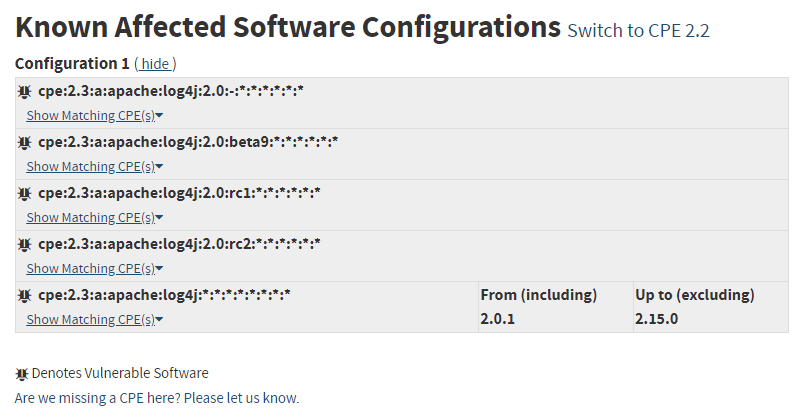 CVE/NVD currently has log4j as the only impacted product in their list of CPEs. While the root vulnerability is in fact, in log4j, we have already determined that there are over 200 products affected and we’re still processing a long list of related advisories.

Products that are affected are from major vendors such as:

There will be many more affected products still to be identified. And, of course, many more SaaS services will be impacted as well. It will take some vendors months to fully assess the impact of this vulnerability to their product portfolio.

The vulnerability was given the nickname “Log4Shell” by LunaSec, because it is a remote code execution that is relatively simple to exploit in many services and products. If an attacker can generate an event that is logged, it can result in shell access to the system. We aren’t trying to split hairs here but “remote” actually depends on how the library is used. Just because a product uses log4j does not necessarily mean it is vulnerable remotely.

The message lookup feature is the real problem, so how it can be used actually depends on where the logged malicious input comes from. For some products it is remote, for others it will be local, and others still won’t be affected at all since they don’t log attacker-controlled input. Exploitation requires that an attacker can control the string being logged.

While the default assumption is that it can be triggered remotely until you know otherwise for a specific product or usage, the truth is that it all depends. If it is faster to upgrade the log4j library than perform a root-cause analysis, upgrade first.

“If it is faster to upgrade the log4j library than perform a root-cause analysis, upgrade first.“

There have been a number of grim pronouncements from security vendors on just how nasty Log4Shell is:

Could Log4Shell be the “worst vulnerability ever”? At RBS we avoid fear-mongering, so we will say “to be determined” for now, but the potential is certainly there, and organizations need to pay attention. While vulnerabilities in OpenSSL, such as Heartbleed, were prevalent, exploitation was more difficult on some servers.

Log4Shell deserves to be taken seriously for the following reasons:

“Variant” might just be our word of the year at this point, with seemingly endless new COVID strains in the press, and, more cheerfully, for the Marvel fans, Loki variants… well now, yes, there is actually a Log4Shell variant to worry about.

Many people are referring to one CVE for Log4Shell, but there are actually three assignments as we go to press:

The relationship between log4j2 (CVE-2021-44228) and log4j1 (CVE-2021-4104) could be confusing. There has been back and forth discussion over the past few days as to whether log4j 1.x is affected or not. As of December 13, RedHat assigned CVE-2021-4104 for a vulnerability under specific conditions. It requires considerable local access and will result in local privilege escalation.

That is important because a 1.x developer has stated:

The developer was speaking about remote exploitation like CVE-2021-44228, where Red Hat’s CVE-2021-4104 is an entirely different attack vector. That means this has the potential to haunt us for a long time.

Add to that the CVE-2021-45046 assignment, which represents an ‘incomplete fix’ but is really the same vulnerability. MITRE and CVE Numbering Authorities (CNA) will assign a second CVE ID in cases of fixes not fully patching an issue. This helps some organizations in tracking an issue while introducing confusion to others.

Despite there being more than one CVE, many places have been treating them as a single issue, but this is definitely not the case. Based on our code review a few days ago and various discussion threads, we believe that 1.x is not affected as far as remote exploitation. We don’t believe that it includes the problematic message lookup functionality that was introduced in 2.0beta9 (or around that version). The vulnerability also only exists under very very limited circumstances i.e. requires JMS Appender class being in use (not often the case), JDNI support, and seemingly also config write access. Rob Fuller also just published a nice quick “Fact or Fiction” post on his LinkedIn page that helps understand the issue.

Yes, this appears to be an important issue and it needs to be taken seriously.

In order to help plan your approach here are some recommendations:

This vulnerability is unfortunately going to be around with us for years… remember Heartbleed? Even with all that press, years later servers were still vulnerable and not patched. This new log4j vulnerability will likely haunt us for years to come. As always, we will keep an eye on this vulnerability and continue to monitor the situation.

Got all that? You are just in time for your regularly scheduled Patch Tuesday, with many more vulnerabilities to assess and remediate!